Shawn- for finding canoes in magical places; how you got these all together in such a relaxed fashion is your brand!

Jake and Caitlin - for organizing and guiding the run and the general event.  Caitlin knows that the only thing to do when the trail disappears underwater is to go underwater with it!

Colin - for hosting the night-before party, driving the rig around town, helping to generally organize, and carrying Nick's lifeless body to the finish (again)

Emma C-C - for doing such a great job of getting the word out to the University of Toronto's Outdoor Club; stoked participation!

Torontoadventures.ca - for loaning us 8 canoes and all of the life jackets and paddles we needed.  Super convenient to be able to drop them off by the Humber after the paddle!

David Slaughter - for capturing some great shots, including the two beautiful fall pictures on this page 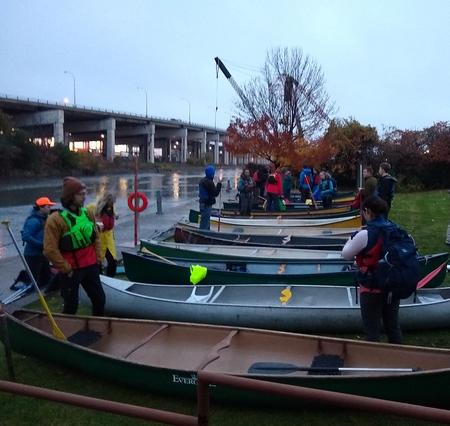 Toronto Regional Conservation Authority:Watershed conditions statement: Due to the significant rainfall, all rivers within the GTA will be experiencing higher flows and water levels, resulting in potential flooding and hazardous conditions. The possibility exists for flooding on roadways and in low-lying areas. The combination of slippery and unstable banks could create hazardous conditions close to any river, stream or other water bodies. All rivers and streams within the GTA should be considered hazardous.  Davenportage Response: Let's run some river bank trails and  then hit the canoes!

Always seems to be relaxing at first.  There were calls to carry many more canoes.  Those calls died down a few km later.

It was quite crazy.  We clearly picked the best/worst time to be hanging out around the rivers. 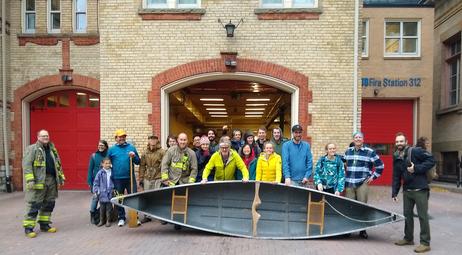 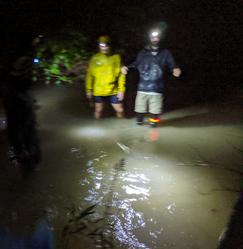 Looks like a leisurely paddle up the Humber.  The current is not shown - photos taken 20 minutes later were identical.

Yorkville Fire Station food drop-off.  That returning fire truck will have to wait! 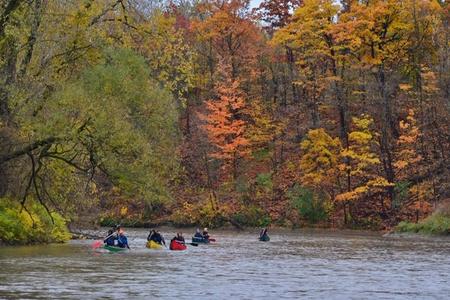 13 canoes line up at our back-up paddle launch site early.  The Don was in rare white-water form.  Yet it was brown. 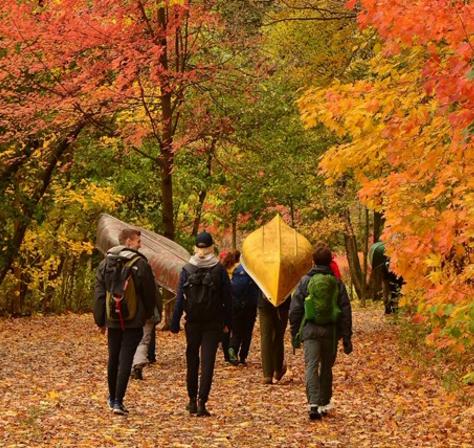 It's 5:00 am and I've been running for an hour completely drenched to the bone, scrambling through leaves, mud and 'crap' down a ravine in which storm (and probably sewer) water rages everywhere.  The rain is intense as is the darkness; my soggy headlamp dead long ago.  I reach for my phone to check the time... gone! dropped somewhere back in the slop.  Hearing my fellow participants howling with excitement (and some fear) as they plunge forward into the darkness I know that Davenportage 2019 will be one for the ages!!!

Not for the faint of heart, 2019 saw long awaited challenging weather conditions.  Wind, rain, waist deep water running trails, and strong river currents.  Nothing made a dent on the spirit of the event which reached new levels of madness and fun.  Even coordinating a real-time 6:30 am change of the paddle-start location (sans phone) and an early canoe capsize and subsequent storm sewage rescue didn't slow us down.

Did some of the older folks implode on the portage, their legs possibly damaged for life?  You bet!  Were the canoes the heaviest in distant memory? Of course!  Did the pea soup and finishing fire help limit the psychological damage?  Yes, especially when I got my phone back!  Some smart person pointed out that in earlier times, people would have just postponed on account of the insane weather.  One more bit of evidence suggesting we might not be so advanced! The horror, the horror.